Shimla: To curb the tourists’ hooliganism, the state police has initiated extensive checking of tourist vehicles on all entry points of the state.

Following the directions by DGP Sanjay Kundu, the Police teams have been deputed to check tourist vehicles at most of the entry points of the state borders.

In compliance with DGP office instructions, unlike other districts police, the Lahaul-Spiti police have also initiated strict vigilance and checking tourists’ vehicles. Police have also issued phone numbers and advised to inform police in case of any tourist hooliganism nearby.

The state police has initiated the action following the nasty incident when tourists from Punjab had brandished swords to intimidate locals at Manali. In another incident, tourists had chopped off a finger of a local resident at Mandi for opposing creating nuisance in Mandi.

These two unsavoury incidents have evoked sharp criticism from the people of the state.

Following these incidents, the state Police have been directed to “conduct random checking of vehicles entering the state to ensure that no such materials like lathi, sword and other objects which may be used as weapons are transported in the state.”

The action is aimed to prevent the apprehension of breach of a peaceful atmosphere in the state. It has also been directed to ensure that the Covid is appropriate in the state, DGP official statement said. 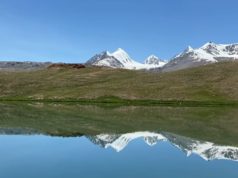