308 boxers from across India eying place in Tokyo Olympics

Baddi: Second day of 4th Elite National Men’s Boxing Championship at Baddi University of Emerging Sciences and Technology began with the exhilaration. Pugilists are in a high spirit to acquire triumph and save their place for the Tokyo Olympics.

Championship are witnessing keenly contested bouts with talented young boxers from across the country giving it all in the Ring. Second day of the championship was commenced with the 37th bout under Heavy (91kg) weight category 3rd session of National Men’s Boxing Championship elated the audience.

In the Heavy weight 91kg category, Bronze medal winner in the Commonwealth GamesNaman Tanwar gave a flying start by defeating spirited Ashish Bhandor (HP). Mrunal Zarekar got the better of Gajal Valiyathan, dominated right from the start, won by 5:0 in Heavy weight 91kg category. Haryana’s Naveen got the better of Maharashtra’s Reynold Joseph 5-0 in a dominating performance.

Star Boxers to look out for

Teams from Ladakh and Andaman & Nicobar will participate for the first time, reflecting the Boxing Federation of India’s (BFI) efforts to promote boxing throughout the country.

He congratulated Boxing Federation for choosing Himachal to hold the mega event and showed gratitude for Baddi University of Emerging Sciences and Technology for hosting the event in such a short time. He wished participants to give their best. 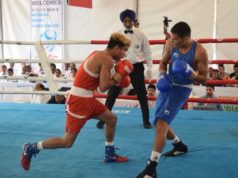 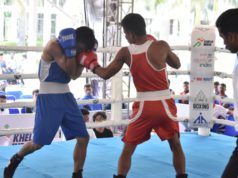