Chopal: Four including a woman were killed while one sustained injuries in a car accident in Kupvi, district Shimla.

The accident took place on Thursday near Bagh Majholi on Haripurdhar-Labhan link road when a driver lost control of the vehicle at a steep curve and it skidded into a 100-meter-deep gorge, killing three people killed on the spot.

The accident was noticed by local residents who immediately informed the police. A police team reached the spot and rescued the injured as well as recovered the dead bodies. The injured were rushed to Public Health Care (PHC) Haripurdhar where Vidya succumbed to injuries. Ranveer was later shifted to Zonal Hospital, Solan for further treatment.

Deputy Superintendent of Police (DSP) Chopal Raj Kumar confirmed the report and said the police are conducting the investigation. 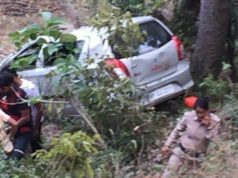 Himachal: Over 1.85 Crore fine collected for not wearing mask