Palampur: Industries Minister, Bikram Singh Thakur on Tuesday claimed that his party is upbeat and will win merge the Palampur urban body elections.

“There is enthusiasm among the party workers to win all the 15 wards in the newly formed Municipal Corporation Palampur,” Thakur who is also party in-charge to oversee the election.

The party has chalked out a strategy and all the teams and those entrusted with the duties have started work, he added.

Congress is not in a better position, neither at the national level, nor in the state, the victory of BJP in inevitable, he asserted.

Replying to a question on ticket distribution that has annoyed the party workers, he said, “BJP is a huge party and there were many seeking party tickets in every ward, hence resentment is understood and right to expression is acceptable. However, party after discussion and based on survey allotted tickets considering their winnability factor.

He said that the BJP had been instrumental in creation of new Municipal Corporation in Palampur and the party will also come out with a vision document that will be public soon to develop Palampur.

The progress and systematic development keeping in view tourism potential will be on agenda, he added. 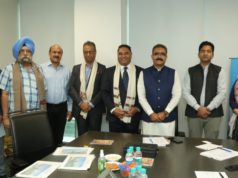