Chandigarh: The State Government signed 27 Memorandum of Understandings worth Rs. 3,307 crore with various industrial sectors at Chandigarh that would provide direct and indirect employment opportunities to around 15,000 persons.

Trident Co. has signed a pact to set up a textile park and is likely to make an investment of Rs. 800 crore while Better Tomorrow Infrastructure and Solution Private Limited signed an MoU worth Rs. 490 crore for setting up a private industrial park.

Madhav Agro to set up a private industrial park with an investment of Rs. 400 crore. Himalayan Group of Institutions signed a pact to establish a skill university in the State.

For achieving the target of the Government of India for blended fuel and making India self-reliant, the State Government invited manufacturers from the ethanol sector. The state government signed pacts with 6 companies for setting up ethanol plants in the State.

Director Industries said that the State Government was all geared up for organizing the 2nd Ground-breaking Ceremony and making all efforts to attract fresh investment in potential sectors in post-Covid era. 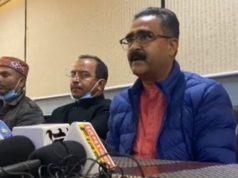