Kullu: A couple has been killed in a road mishap in Kullu district, police said on Saturday.

The deceased have been identified as Om Prakash (54) and Shakuntla Devi (52), both residents of Dhalpur, Kullu.

According to police, the accident took place on Saturday around 12:00 noon on National Highway 305 (Aut-Ani-Sainj NH) near Ghiyagi village when they were travelling in their car (HP 34C 5710) and Om Prakash lost control of the vehicle and it plunged into a deep gorge, killing both of them on the spot.

The vehicle was then noticed by some local residents who immediately informed the police. Police reached the spot and recovered the dead bodies.

The bodies are being taken to the nearby hospital for postmortem.

Superintendent of Police (SP) Kullu Gaurav Singh has confirmed the report and said that police are conducting the investigation.

“The accident has occurred due to rash and negligent driving” he said. 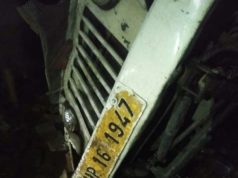 Four killed, one injured in a car accident in Shimla district

Mumbai tourist dies in a car accident in Kullu