Mandi: Two tourists died while one sustained injuries after the car (PB 35 AH 3787) they were travelling in plunged into the Beas river near Pandoh, district Mandi.

The accident took place on Thursday on Chandigarh-Manali National Highway night near six miles when Vidhu Sharma, who was driving the car, lost control and it plunged into the Beas river. At that time, they were returning to their home from Manali.

Police reached the spot as soon as it received the information and rescued the injured as well as recovered the dead bodies. The injured was rushed to Zonal Hospital, Mandi where he is undergoing treatment. Postmortem of the deceased will also be conducted there.

Superintendent of Police (SP) Mandi Shalini Agnihotri confirmed the report and said the police is conducting the investigation. 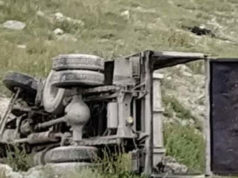