Mandi: One person was killed while 39 sustained injuries after a Himachal Road Transport Corporation (HRTC) bus rammed into a retaining wall at Deyod near Pandoh in district Mandi.

The collision was so intense that the front part of the bus was completely damaged.

According to reports, the bus was en-route to Shimla from Manali. When the bus reached Dayod, the driver lost control of the vehicle and it rammed into the retaining wall, killing the driver on the spot.

The District administration has provided Rs. 2.50 lakh as immediate relief to next of kin of deceased and injured people. 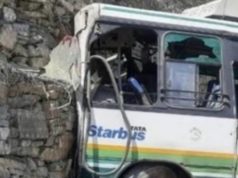