Vikramaditya Singh in solidarity to the yeoman services rendered by Sarabjeet Singh, sat on Dharna along with the public at historic Ridge

Shimla: Indira Gandhi Medical College (IGMC), Shimla is facing public ire after it got the free langar services closed that is being provided by a local NGO, Almighty Blessings.

Claiming the langar services being run illegally, hospital administration got the premises of the Almighty Blessings vacated that was used to serve free food to the needy patients and their attendants.

A Dharna was held at the historic Ridge on Sunday evening that witnessed participation of Congress MLA Shimla (Rural) Vikramaditya Singh, former Shimla Municipal Corporation Deputy Mayor Harish Janartha along with the public.

Those protesting accused the hospital administration of high-handedness and taking the help of the police Quick Response Team on Saturday, to get the langar closed and throwing out the belongings of the NGO that include utensils and medical equipment oxygen cylinders and oxygen concentrators that was provided to the needy patients suffering from Covid-19.

The langar services run by Sarabjeet Singh Bobby from last 7 years, provided meals, three times to over 2500 patients and attendants on daily basis.

Vikramaditya Singh said, that it was very unfortunate on the part of the hospital administration to take such an action to sabotage the yeoman services being rendered by Sarabjeet Singh Bobby.

“The action has come at a time when Sarabjeet Singh is recouping in the hospital after a kidney transplant in a hospital in Chandigarh. This is highly insensitive and condemnable,” he said, adding that as being claimed by hospital administration about illegal water and electricity connection, it could have been sorted out amicably.

He urged the Chief Minister, Jai Ram Thakur to intervene and re-allot the premises to Sarabjeet Singh so that such a philanthropic service to humanity is not affected.

“I feel that some things in the society should be above politics. I along with thousands of people have seen the langar services being run for more than seven years and such social services should not be affected,” he said.

The Shimla police and the hospital administration is playing into the hands of the political master, he charged.

Others participating in the Dharna have also appealed to the Chief Minister to step in and get the langar services resumed.

They accused the hospital administration of politicising it and playing into the hands of people having vested interest.

It’s not just langar services it is the hope for thousands of needy especially the poor people who visit the hospital during their tough times while seeking treatment at the hospital, said Anchal Gupta.

The langar services have witnessed participation of the tall political leaders like former six-time Chief Minister Virbhadra Singh, two former Governor’s Acharya Devvrat and Bandaru Dattatreya, who had served langar to the patients and their attendants.

The public has also taken to various social media platforms to condemn the action of the hospital administration causing major embarrassment.

It is pertinent to mention that Sarabjeet Singh Bobby had even continued his langar services despite the Covid-19 pandemic and had served food in packets not only to patients and attendants but also reached out to those poor and needy across Shimla who were struggling for three square meals during the pandemic. In wake of the pandemic and shortage of oxygen cylinders and oxygen concentrators, he had also arranged for the same to be provided to the Covid-19 patients. 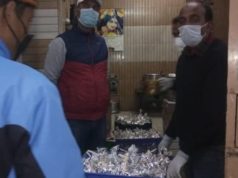 Private industries and Govt dept should band together for employment generation:...