Shimla: While disposing off a transfer petition, the Himachal Pradesh High Court, has directed the Education Department to initiate an inquiry against the petitioner as also her husband for major misconduct and also imposed a cost of Rs.50,000 upon the petitioner for abusing the process of the Court.

The Division Bench comprising Justice Tarlok Singh Chauhan and Justice Chander Bhusan Barowalia, passed these orders on a petition challenging the transfer order dated December 14, 2020 of the respondent to GHS, Jol under control GSSS Bhali, where the petitioner herself had joined on December 14, 2020, after being relieved from GHS, Draman (Kangra).

However, during the course of the hearing, it was revealed that on 14 December 2020, when the Principal, GSSS Bhalli was on official duty, the petitioner alongwith her husband entered his office without permission from any person on the campus. Thereafter, the petitioner opened the official table locker and marked her attendance in the Teachers’ Attendance Register. The petitioner admitted before the Court that the joining report was made by the petitioner herself and the noting portion regarding joining her service as TGT(ARTS) was appended by her husband on the Joining Report.

The Court observed that the conduct of the petitioner and her husband is totally unbecoming of the teacher and therefore they deserve to be charge-sheeted for major misconduct.

The Court also observed that the petitioner has not come to the Court with clean hands and has filed a false claim to gain an unfair advantage and has abused the process of the Court.

The Court observed that it is a lamentable state of affairs when the teachers, who are considered as equal to God, would fall from the highest pedestal to the lowest level by caring and looking after their self-interest alone and not the interest of the pupil(s).

The Court also observed that it is the educational institutions which are the future hope of this country. They lay the seed for the foundation of morality, ethics and discipline. If there is any erosion or descending by those who control the activities all expectations and hopes are destroyed.

Teachers, in our perspective, are men of character, honesty, simplicity and dedication, but, both the petitioner and her husband who happen to be the teachers in government school, have not done justice to their roles as ideal teachers.

The Court directed to submit the compliance report on October 5, 2021. 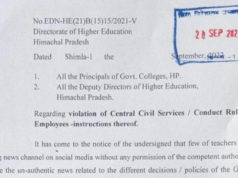