The fire is said to have broken out in the afternoon in one of the houses amidst the cluster of houses, engulfing other adjoining houses.

Locals people sprung into action before fire brigades, police and the army reached the spot and the fire was brought under control.

While no loss of life has been reported, however property worth crores of rupees was gutted in the fire.

The cause of the fire is yet to be ascertained.

He assured that all possible help would be provided to the affected families.

Deputy Commissioner, Kinnaur Gopal Chand along with other senior officers of the district rushed to the incident site and supervised the relief and rescue operations.

On the directions of the Chief Minister district administration provided immediate relief of Rs. 10,000 to each affected family. 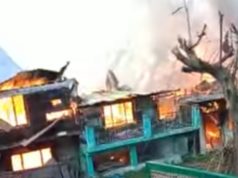