Shimla: Coronavirus cases have crossed 10,000 mark in the state. State has tested 419 positive cases today, taking the tally to 10,335.

The highest eight deaths in one day were also reported in the state.

Meanwhile, the State Government has thrown open the borders as now onwards no e-pass or registration would be required to enter the state. 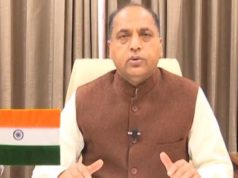 Anurag Thakur to visit UK as part of Parliamentarians delegation