Prakash from Kullu tops in Sciences, Megha from Sirmour Commerce topper and Shruti Kashyap from Shimla scored 98.2% – tops in Arts

Dharamshala: Himachal Pradesh Board of School Education declared its 12th result. Out of 86,663 students, 65,654 have cleared the HPBOSE Class 12th Exam. This year, overall passing percentage is 76.07%, which is 14 per cent better than previous year.

9391 students have compartment, while close to 350 students didn’t appear for the examination.

The Himachal Pradesh Board declared the result through a virtual press conference.

Names of toppers from science stream

Names of toppers from commerce stream

Names of toppers of Arts stream 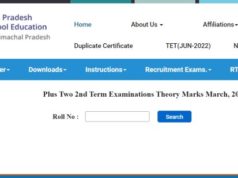