Chief Minister said that the North Western Himalayan Region of the country with a population of 3.1 crore and area 3,31,953 square kilometers comprise the Union Territories of Jammu and Kashmir and Ladakh and the States of Himachal Pradesh and Uttrakhand. He said that the region being rich in bio diversity and natural resources like minerals, water and forests was suited for cultivation of various crops.

Jai Ram Thakur said that Himachal Pradesh being a key State in this region and major river basins like Satluj, Ravi, Beas, Chenab and Yamuna fall in the State. He said that the State offers huge potential in agriculture and allied sectors, the existence of an institute of higher learning and research in the form of Central Agriculture University would go a long way to bring much needed prosperity to the people of the entire North-Western Himalayan Region.

Chief Minister said that CSK Himachal Pradesh Krishi Vishwavidalaya, Palampur was centrally located and well connected by air, road and rail. He said that it has adequate existing infrastructure and sprawling campus of about 615 hectares with constituent colleges of Agriculture, Veterinary and Animal Sciences, Community Science and Basic Sciences including a network of about 12 regional research stations/sub stations and eight Krishi Vistar Kendras located on 233 hectares of land in different agro-climatic zones of the State. 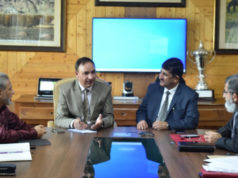 Heeng and Monk fruit to be promoted through active collaboration: Governor

Govt. decides to inspect 10 private universities, sets up teams for...