Prini/Kullu: Himachal Pradesh Chief Minister formally launched ‘Ek Buta Beti Ke Naam’, from the premises of Atal Bihari Vajpayee’s house at Prini. Under this scheme, five tree saplings would be presented to the families of newly born girl child along with other kit. He presented five deodar saplings to the mothers of a newly born girl child, besides twenty kilograms vermicompost, five tree guards and name plate of the girl child to the family members.

While addressing the people on the occasion, Chief Minister Jai Ram Thakur said that Atal Bihari Vajpayee always considered Himachal Pradesh his second home and has a house at Prini in Kullu district. He used to visit the State whenever he got time from his busy schedule. Jai Ram Thakur said

“Atal Bihari Vajpayee was a multi-faceted personality and apart from being a great Statesman, he was an outstanding orator, a passionate poet and a committed journalist.”

Jai Ram Thakur said that the idea to construct Rohtang tunnel connecting landlocked winter-land Lahaul valley with rest of the world was conceived by Atal Bihari Vajpayee and the project was also announced by him. He said that this project was the biggest gift of Vajpayee to the State.

Chief Minister released a book on Atal Bihari Vajpayee brought out by the State Language, Art and Culture Department which has been edited by Dr. Inder Singh Thakur. He also released the logo of ‘Ek Buta Beti Ke Naam’ on the occasion.

Transport and Forest Minister Govind Thakur said ‘Ek Buta Beti Ke Naam’ would go a long way in increasing the green cover of the State as every family with the newly born girl child would be provided five tree saplings. 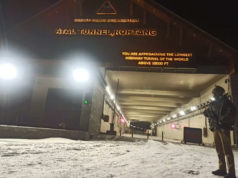