The Border Road Organization, a wing of Indian Defense Services, has assured that wait for the completion of Rs. 4000 crore Rohtang Tunnel, which was announced back in 2000 but didn’t see much progress until 2010, will end in 2019. In 2010, the tunnel project was taken up with new deadline of five years. The geological troubles like flash floods that had killed several laborers, appearance of a rivulet during digging and fragile, weak rock strata that had left boring machines ineffective etc. didn’t let the BRO achieve its target. But recently, the BRO informed about the progress and claimed that the two ends of the tunnel would meet in second half of the year and, hopefully, the tunnel will be commissioned by 2019.

When completed, the Rohtang Tunnel will be the world’s longest tunnel at an elevation of over 3,000 meters in eastern Pir Panjal ranges of Himalayas. The south end of the 8.8 km long horseshoe style tunnel will be located 25 km from Manali in Dhundi and north end will be in the Sissu village in Spiti. It would be another engineering marvel for not only India but for the world. After all, it’s not easy to conquer mighty Himalayas full of geological surprises and extreme cold weather conditions throughout the year.

The Rohtang Pass (3,978 m), which is above the ongoing tunnel project, currently remain closed for six months due to which a population of about 20,000 people has suffered very slow economical and geographical development.

The road will facilitate transportation of construction material to goods for businesses. It would be a boon for the hilly region of India.

On its completion, Lahaul-Spiti will enjoy connectivity throughout the year, which means a lot for the people. Secondly, the tunnel will also ensure regular supply to military in Leh-Ladakh region. The tunnel is located on Manali-Leh Highway, which makes it strategically important and the life-line of this region.

The tunnel will reduce the distance between Manali and Lahual-Spiti by 46 kms and cut down four hours travel time. In 2008, the contract of the tunnel was awarded to a joint venture of AFCONS Infrastructure Limited and STRABAG AG of Austria. Currently, the team is using drill and blast technique as part of the New Austrian Tunnelling Method (NATM).

While, it does mean a lot development for Lahaul-Spiti region, the tunnel is also an invasion on fragile Himalayan ecology. Hundreds of trees were axed to pave way for it. The vehicular traffic in the region is limited as it remains closed half of the year. However, the tunnel will ensure heavy traffic throughout the year, which also imply rapid rise in vehicular emissions.

Rohtang Pass is already under scanner after the National Green Tribunal imposed restriction on entry of fossil fuel vehicles to reduce emissions. NGT had taken strong notice of the researches indicating depleting glacier cover in the region due to rise in air pollution. In this way, it’s a typical development vs environmental protection situation.

It is believed that the suggestion for the construction of a tunnel in Rohtang was first given by the Moravian Mission in 1860. However, it was actually considered by the then Prime Minister, Atal Bihari Bajpai, in 2000. Since, then the cost of the project kept rising. However, finally it’s nearing it realization. 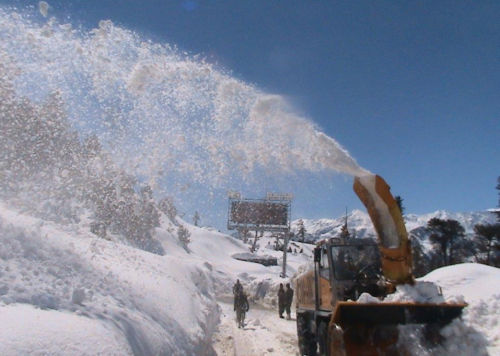