Official notification of transfer orders has been issued by the state government on Sunday evening.

2016-batch IAS Priyatu Mandal has been transferred to the post of Secretary (Rural Development and Panchayati Raj). He will also continue to hold the charge of the post of Divisional Commissioner, Shimla Division.

Commissioner, Dharamshala Municipal Corporation Pradeep Kumar Thakur has been transferred to the post of Director, Department of Empowerment of SCs, OBCs, Minorities and Specially Abled. He will also be holding the additional charge of the post of Managing Director, HP Minorities Finance and Development Corporation, Shimla.

ADC, DRDA, Kangra at Dharamshala Gandharva Rathore as Settlement Officer, Kangra Division at Dharmendra. He has been replaced by SDO Theog Saurabh Jassal who has been transferred to the post of ADC, DRDA, Kangra.

The state government has also transferred as many as nine HPAS officers. 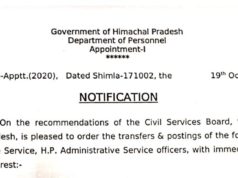