Baddi: In a shocking incident, a husband allegedly committed suicide after brutally murdering his wife in Baddi, district Solan.

The deceased are Priya Bhatt (25) and her husband Rinku Tiwari (30), residents of Sultanpur, Uttar Pradesh. They were living in a rented apartment in Housing Board Colony, Baddi. Rinku was working as a loan agent in Baddi while his wife Priya was working in a beauty parlour. The couple had two daughters, aged four and two.

According to police, Priya had requested her neighbours to take care of her daughters for a while. However, when she did not come back to take her daughters, a neighbour reached their room and found dead body of Priya lying on the floor in a pool of blood and also saw Rinku Tiwari’s body hanging from the ceiling. After this, he immediately informed the police about the incident.

Superintendent of Police (SP) Baddi confirmed the report and prima facie is that the couple had a heated argument which led to the crime. He said that a case under section 302 of the Indian Penal Code (IPC) has been registered and further investigation is going on. He further said that no suicide note has been found at the crime scene. 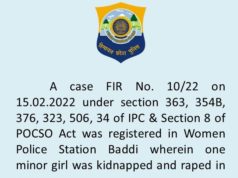 Team of geologist requisitioned to ascertain cause of landslide in Sirmaur:...