Reacting to the finding huge quantity of liquor at Rampur in Shimla district (Rampur assembly constituency is a part of Mandi Parliamentary) in a vehicle carrying a flag of BJP, Rathore accused the BJP of killing the democracy.

Congress president has demanded a speedy inquiry into the matter and sought to register a criminal case against the culprit.

Accusing the Election Commission of inaction over the complaints against the BJP, Rathore said that the Commission has become a puppet in the hands of the BJP.

“Neither any cognizance is being taken of the complaints of violation of the model code of conduct nor any action is being taken upon it,” Rathore said in a press statement.

Rathore has asked the Election Commission to strictly impose the model code of conduct in the state and keep a close watch on the money power of the government. 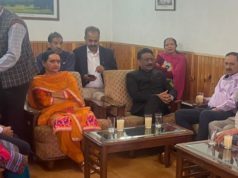