Shimla: Himachal Youth Congress has decided to ‘gherao’ Vidhan Sabha on 18 March, to protest against inflation and unemployment.

HYC President, Nigam Bhandari said that inflation has overburdened the common man with a spiralling price rise of LPG, petrol, diesel and food items are also increasing day by day.

“Despite cautioning the state government, no heed is being paid to bring about change in the policies,” he said, adding that the Vidhan Sabha gherao is to protest against the anti-people, anti-farmer and anti-employee policies of the state and central government. 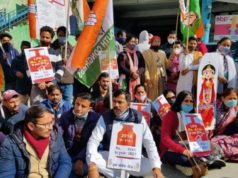