Shimla: Four including three migrant labourers from Bihar were killed and one sustained injuries after a car (HP 41 0545) they were travelling in plunged into a deep gorge in Kumarsain Tehsil, district Shimla.

The deceased have been identified as Keshav Khachi, resident of Theog, District Shimla, Vijay Ram, Miraj Ali and Sahab Ansari while the injured has been identified as Nasiruddin All. All four of them were from Bihar. They were on their way to Kreothi village from Theog.

The accident took place on Saturday night near Sonadhar on Odi-Mashinkhad link road after the driver lost control of the vehicle and it skidded into a 250-feet deep gorge.

The accident was noticed by local residents who informed the police and called for an ambulance.

Police reached the spot and rescued the injured as well as recovered the dead bodies. The injured was rushed to Mahatma Gandhi Medical Services Complex, Khaneri in Rampur Bushahr where he is undergoing treatment.

Deputy Superintendent of Police (DSP) Rampur Bushahr Chander Shekhar confirmed the report and said police is conducting the investigation. He said that postmortem of the deceased will be conducted today after which the bodies will be handed over to their relatives for cremation. 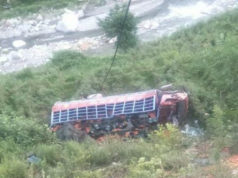