This move has given fire to the speculation that Sharma will be joining BJP during BJP National President JP Nadda visit to the state on October 10.

Sharma and his family is notoriously known for changing parties right before the elections.

Aashray Sharma and his father Anil Sharma joined BJP in 2017, just before the 2017 Legislative Assembly elections. Anil Sharma went on to win the elections and became a Cabinet Minister.

However, as the 2019 Lok Sabha elections approached near, Aashray Sharma and Sukh Ram Sharma left BJP for Congress. At that time Sukh Ram was asking for a ticket for his grandson but was denied by the party.

Sharma went on to contest Lok Sabha elections from Mandi as a Congress candidate which he lost with a record margin. His adventure cost his father Anil Sharma his cabinet seat.

In September, Sharma also resigned as a member of Yuva Rozgaar Yatra after alleging interference in Mandi by leaders of Shimla.

Now he has cited nepotism and the importance being given to one particular family in the state as his reason for resignation.

While addressing a press conference in Mandi, Sharma lashed out at Congress and said that the party has become a private limited company.

“It is very surprising that despite having many brilliant leaders in the state as well as in the country, preference is being given to a particular family which is not right,” said Sharma.

“Congress has been limited just to a royal family in the state” he added.

Sharma said that in 2019 when every leader refused to contest Lok Sabha elections, he stepped in after the request of then-party President Rahul Gandhi.

Heaping praise of Chief Minister Jai Ram Thakur, Sharma said that he will forever be thankful to CM Jai Ram Thakur. He said that CM had sent his helicopter when his grandfather was suffering from a serious illness.

He said that the state has witnessed unprecedented development under the leadership of CM Jai Ram Thakur. 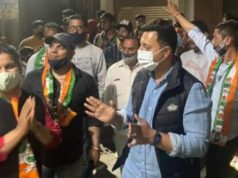