Nauni/Solan: Noted farm scientist Prof Rajeshwar Singh Chandel has been nominated as a member of the Advisory Committee for promotion of Natural Farming by the INM division of the Government of India, Ministry of Agriculture and Farmers Welfare.

The committee will advise and guide in the smooth rollout and promotion of Natural farming in the country. The tenure of the Advisory Committee will be for a period of two years.

Professor Chandel was recently nominated as a member of the Governing Body and General Body of the Indian Council of Agricultural Research (ICAR) Society for a term of three years.

A noted entomologist, Prof Chandel has over 25 years of experience in education and research. Professor Chandel started his career as a Research Fellow and later joined Nauni University as an Assistant Scientist. He has also served as Joint Director of Research, Senior Scientist, Entomology and Principal Residue Analyst at the university.

Prof Chandel has done extensive research on apple pollination in dry areas, herbal honey production, increase in production of pistachios and many other fields.

Before joining as the Vice-Chancellor of UHF Nauni, Professor Chandel also served as the Executive Director of the Prakritik Kheti Khushal Kisan Yojana (PK3Y) where he was instrumental in popularizing the natural farming movement in the state. Due to his efforts, the Himachal model of natural farming has also been appreciated on different platforms by the Prime Minister of the country. 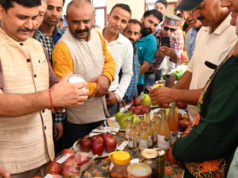 SAT set up for speedy disposal of Service Matters: CM