Shimla: The National Students’ Union of India (NSUI) on Monday started a signature campaign against the Agnipath scheme in Himachal Pradesh University, Shimla and has demanded its immediate withdrawal.

HPU, NSUI Vice President, Yogesh Yadav said that the youth of the country is being cheated through this scheme.

He said that in this scheme, no roadmap has been made for the youth after four years, no rank has been fixed, no medical and canteen facilities have been provided, and only a higher percentage of the security budget is spent on pension.

“Thousands of youth of the state also used to get a permanent employment in the army, but now the central government has also snatched this opportunity from the youth,” he said.

He said that such a scheme also puts the security of the country at stake.

He further said that protests will be staged at every college and university in the state in the coming days.

NSUI has warned to intensify the movement central government does not withdraw this scheme.

Ever since the Agnipath scheme was announced, it has drawn major flak from the youth. Massive protests have been staged throughout the country against the scheme. However, many prominent business households have ensured employment to the Agniveers.

Recently during the Himachal Pradesh Cabinet meeting, the state government decided that it will ensure the employment of Agniveers. 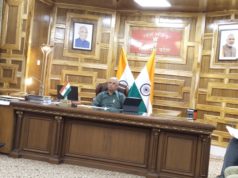 Silence zones and signboards not enough to make Shimla a noise-free...