New drone rules will help in the spheres of many sectors like health and agriculture: PM

During the interaction, talking to Dr Rahul of Civil Hospital, Dodra Kwar Shimla, the Prime Minister praised the team for minimizing the vaccine wastage and discussed their experience about serving in a difficult area. Talking to vaccination beneficiary Dayal Singh of Thunag, Mandi, the Prime Minister enquired about the facilities of vaccination and how they dealt with the rumours regarding vaccination.

The Prime Minister said that the world’s biggest vaccination programme is continuing due to the efforts of people like Karmo Devi.

PM Modi said Himachal Pradesh has emerged as a champion in the fight against the largest epidemic in 100 years. He added that Himachal has become the first state in India to have administered at least one dose of corona vaccine to its entire eligible population. This success has underlined the importance of Aatmvishwas and Aatmnirbharta, said the Prime Minister.

He said that the success of vaccination in India is the result of the spirit and hard work of its citizens. India is vaccinating at the record speed of 1.25 crore vaccines per day. This means that the number of vaccinations in India in one day is more than the population of many countries. The Prime Minister praised doctors, ASHA workers, Aanganwadi workers, medical personnel, teachers, and women for their contribution to the vaccination campaign.

The Prime Minister expressed happiness that even in a remote district like Lahaul-Spiti, Himachal has been a leader in giving 100% first dose.

He also praised the people of Himachal for not allowing any rumour or disinformation to hamper the vaccination efforts. He added that Himachal is proof of how the country’s rural society is empowering the world’s largest and fastest vaccination campaign.

Referring to recently notified Drones rules, the Prime Minister said these rules will help in the spheres of many sectors like health and agriculture. This will open doors for new possibilities, said the Prime Minister.

On the eve of Azadi ka Amrit Mahotsav, the Prime Minister urged the farmers and gardeners of Himachal to make farming in Himachal organic within the next 25 years. He said that slowly we have to free our soil from chemicals. 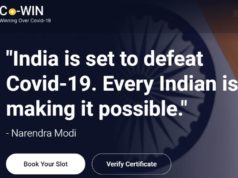