Shimla: In order to prevent the increasing drug menace amongst the youth, Deputy Commissioner, Shimla Aditya Negi on Monday said that the district administration would identify drug addicts and will take them to de-addiction centres for counselling and treatment.

He said this while presiding over a meeting on Drug-Free India in Bachat Bhawan, Shimla.

During the meeting, DC said that various activities would be organized to make the drug-free campaign successful in the district.

“Awareness campaigns will be organised to increase awareness about drug abuse amongst school and college students as well as their parents,” he said.

“Inspections will be conducted from time to time to prohibit the sale of cigarettes and other intoxicants within a distance of 100 meters of educational institutions” he added.

He directed the police to trace intoxicated people, drug dealers and suppliers and take legal action against them. He also directed the Education Department to aware the students about drug abuse through the ongoing online classes.

Apart from this, street plays, awareness vehicles, pamphlets, hoardings and posters will be installed at the Sub Division level to increase awareness about drug abuse amongst the people. 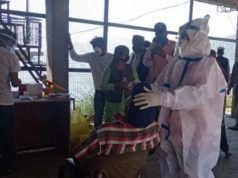 NCC cadets working with corona warriors with a sense of service...