Arki/Solan: All India Congress Committee, Secretary Sanjay Dutt has exhorted party workers to work unitedly to ensure the victory of the party in the ensuing bye-polls.

He was addressing the meeting with the block Congress office-bearers and workers in Arki on Thursday, regarding the party’s election preparations in view of the bye-elections to be held there.

He underlined the need to ensure the victory of Congress candidate to fulfil the dreams of former Chief Minister Virbhadra Singh, who passed away recently due to post Covid complications and had been the sitting MLA from the Arki assembly constituency.

He said that Virbhadra Singh was instrumental in the development of the state which can never be forgotten.

Every Congressman will have to work hard as a team to ensure the victory of the candidate who is chosen by the High Command as the successor of Virbhadra Singh and this will be a true tribute to him.

Dutt said that today people are overburdened by rising inflation and unemployment in the country.

“The farmers have taken to streets sitting in protest against the three black agricultural laws. The government is spying on politicians, press, officials and even judges by getting their phones tapped. The Modi government has completely disturbed the country’s economy and democratic system,” he lamented. 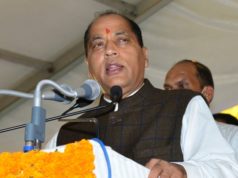 CM doles out goodies for Arki ahead of assembly by-elections Congress will protect the interest of scheduled caste and other backward classes: Sanjay Dutt