Shimla: Varun Kumar, a member of the Indian men’s hockey team that scripted history by winning the Bronze medal in the Tokyo Olympics, after 41 years has made Himachal Pradesh proud and jubilant.

Chief Minister Jai Ram Thakur has announced a cash award of Rs 75 lakh to Varun Kumar, who hails from Osal Panchyat Dalhousie, district Chamba in Himachal Pradesh.
Currently, he is living in Jalandhar with his family.

Earlier, during the Assembly session, Congress MLA Dalhousie Asha Kumari had demanded a cash award for Varun Kumar from the state government.

The spectacular performance of the Indian men’s hockey team , ended a four-decade drought by winning a bronze medal at the Tokyo Olympics, which has created an atmosphere of celebration across the country.

The sports fraternity of Himachal and sports enthusiasts are filled with the sense of pride for having a player from the state in the winning team.

Kumar was included in the Indian hockey team for the Tokyo Olympics as an additional player.

Asha Kumari congratulated the Indian hockey team for its excellent performance during the assembly proceedings and urged the state government to announce a cash award to Varun Kumar so that youth would feel inspired and motivated to join the sports. 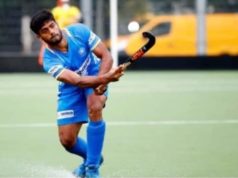 Himachal to start dedicated drop back ambulances for expecting mothers