Shimla: The Himachal Pradesh Youth Congress and National Student Union of India have threatened to hold two-day token chain hunger strike across the state if the state government does not accede to their demands of promoting undergraduate students in wake of the pandemic.

If promoting students was not possible, they demanded conducting online exams.
Himachal Pradesh Youth Congress (HPYC) president Nigam Bhandari has accused the state government of adopting non-serious approach for holding vaccination drive for the students, despite their repeated demands.

Addressing media persons on Tuesday, Bhandari said, “National Students Union of India along with HPYC had demanded vaccination drive for undergraduate students and jointly organized a movement. Consequent to it the state government announced the holding of a vaccination drive on 28 and 29 June.

However, owing to the lackadaisical approach the students were not able to get themselves vaccinated as there were no vaccination centres set up at many places. 50 percent of the students still could be not get vaccination.”

Even as students have not been administered first dose of vaccination, the state government is contemplating of holding offline exams, HD rued.

In wake of the Covid-19 protocol and the risk involved in Covid times, NSUI and HPYC have demanded either promotion or holding of online exams for the undergraduate students.

The decision of the cabinet to hold offline exams in the month of July and August has further added to the anguish of the students as they could not complete their syllabus owing to network issues and various other reasons, he said. 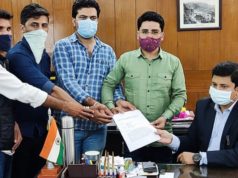