Shimla: To ensure smooth movement of traffic, and provide a safe path for pedestrians, various overbridges are being constructed in various areas of Shimla Municipal Corporation under Amrut Mission with an amount of about Rs. 5 crores.

This was stated by the Minister of Urban Development, Housing, Town Planning, Law and Parliamentary Affairs Suresh Bhardwaj on Sunday during his address after he dedicated a newly constructed overbridge at a cost of Rs 65 lakh in Khalini, in Shimla.

He said that work of construction of other overbridges are in progress which will be completed soon after which will be dedicated to the public.

He said that the overall development of Shimla city is the priority of the BJP led state government and developmental work are going on in various wards of the capital.

“State Government is dedicated to make Shimla beautiful, cleanliness in the city, construction of roads, raw and paved roads and to provide drinking water facility for which the Mayor as well as the Deputy Mayor and councillors are putting in full efforts” said Bhardwaj.

He said that under the Smart City Project, many such works are being completed in Shimla which will provide many facilities to tourists as well as local people in the coming time and Shimla has the potential to get more recognition in the future. 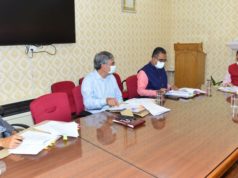