Shimla: The episode of public spat between two tall BJP leaders, over the Central University Himachal Pradesh, has now witnessed a turn of events, with the change in tone and tenor.

Notwithstanding the message of BJP, a divided house speaking in different voices that went across, if rumor mills are to be believed it is said to have not go well with the central leadership.

Union Anurag Thakur in an emotional bout about the Central University his so called ‘dream project’, during the public platform at Jaswan-Pragpur constituency shared by Jai Ram Thakur on Tuesday, blamed the state government for the undue delay.

In a statement issued on Friday, Anurag Thakur, albeit the repercussions of criticism that the incident garnered, his stance has now been softer with a display of complacency, expressing gratitude to Jai Ram Thakur for taking immediate action in giving directions to the officials that was leading to the delay.

He reiterated the Double Engine of BJP government at the centre and state is committed for the progress and development of the Himachal.

“Like always, we will together bring more big projects on the ground in future as well,” he stated.

The change in heart of Anurag Thakur also comes at a time, when Revenue Minister Mahender Singh Thakur came to the rescue of Jai Ram Thakur with clarifications and claimed the delay on the part of Union Environment Ministry. 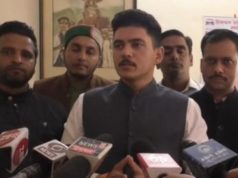 Not only Hamirpur, development lagging in entire state: Abhishek Rana

BJP IT cell playing a vital role in strengthening the party: CM

HPCC thanks Sonia Gandhi for naming Virbhadra Singh as the Chief...