The 55-year-old BJP leader will be formally declared as the new Speaker on Wednesday as no other member of the legislative assembly has filed his or her nomination. The opposition Congress did not file any nomination for the Speaker’s post.

The chief minister Jai Ram Thakur claimed that the BJP high command had decided to appoint Vipin Parmar as the new Speaker.

Vipin Singh Parmar is an MLA from Sullah segment. Parmar was elected to the state legislative assembly for the first time in 1998. He was re-elected as MLA in 2007 and 2017. He was inducted into the Council of Ministers as Health Minister along with the portfolios of Medical Education, Ayurveda and Science and Technology on December 27, 2017. 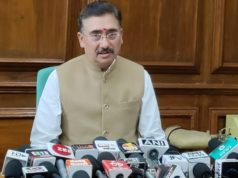