The Excise and Taxation department collected Rs. 6421.55 crores towards government ex-chequer during the financial year 2018-19 against the target of Rs. 5860.63 crores whereas the department has collected Rs. 1159.74 crores up to May, 2019 during current fiscal.

This was disclosed in a review meeting held here under the chairmanship of Principal Secretary (E&T) Sanjay Kundu, in which the officers from all the zones and districts participated.

Sanjay Kundu expressed satisfaction with the performance of the department for achieving the revenue targets and stressed on the need to run special campaigns for realization of arrears due under all heads so that more revenue could be added to government ex-chequer. He also directed to work for plugging loopholes and leakages at all levels.

Principal Secretary also directed the department to take fresh look at the provisions of Excise and Toll policy to make it more effective and realistic to achieve and secure higher revenue. He exhorted to make the excise policy more tourist friendly by amending the relevant provisions and also by securing the government revenue.

It was emphasized to increase professionalism in the department by way of conduct of intensive and adequate training programmes for capacity building and to emulate the best practices and models available in the country.

He directed that the department should adopt a more proactive approach for revenue enhancement under Goods & Services Tax Act. The departmental officers in the field should take more interest in tax collection from the service sector in co-ordination with various government departments.

Sanjay Kundu assured that the department would be adequately strengthened and equipped with all such facilities which are required for effective and efficient tax administration to maximize the government revenue by way of transparency and efficient functioning. 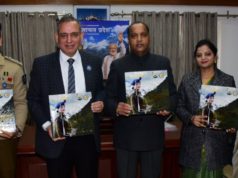 318 villages of Chamba district taken out from wildlife sanctuaries