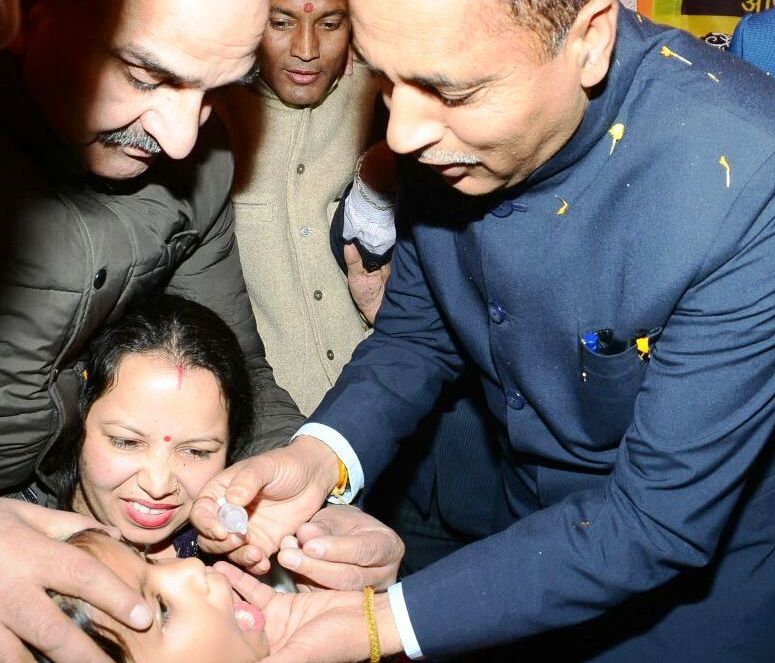 Joginder Nagar: The Chief Minister Jai Ram Thakur administered Polio Drops to the children on the occasion of launching Polio Vaccination drive in the state.

Thakur revealed that as many as 6, 44,036 children below five years of age were to be administered with Polio drops all over the state. To ensure maximum coverage, 5,866 Polio booths have been set up and 11,361 Polio teams have been assigned the task to ensure administering polio drops to children.

The state of Himachal hasn’t reported any polio case since long and even last case of polio virus was reported in West Bengal in January 2011. No polio case was reported in India since then, but our country is at the risk as neighbouring countries Pakistan and Afghanistan (found polio virus in 2016) still have polio virus and hence there is a need for polio vaccination till the global eradication of virus.

Pulse Polio is an immunisation campaign established by the government of India to eliminate poliomyelitis (polio) in India by vaccinating all children under the age of five years against the polio virus.

The project fights poliomyelitis through a large-scale pulse vaccination programme and monitoring for polio cases.

Vaccination against polio was started in 1978 with Expanded Programme on Immunization. By 1984, it covered around 40% of infants, giving three doses of OPV to each. In 1985, the Universal Immunization Program (UIP) was launched to cover all the districts of the country. UIP became a part of child survival and safe motherhood program (CSSM) in 1992 and Reproductive and Child Health Program (RCH) in 1997. This program led to a significant increase in coverage, up to 95%. The number of reported cases of polio also declined from 28,757 during 1987 to 3,265 in 1995.

In 2014, the World Health Organization (WHO) had declared India a polio free country, since no cases of wild polio had been reported in for three years. However, as a precaution, Pulse Polio immunization campaign are being initiated to ensure no children infected with the virus.