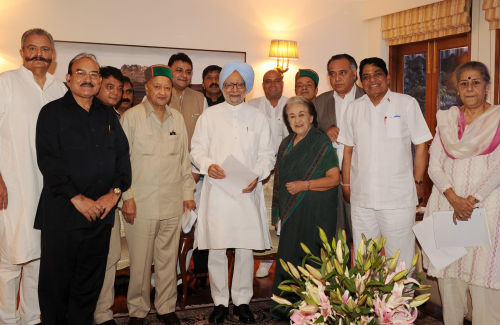 Chief Minister Virbhadra Singh told the Prime Minister that State had suffered massive losses due to heavy rainfall and requested the Central assistance under NDRF and Prime Ministers Relief Fund. He told that first installment of SDRF amounting to Rs. 68.12 crore was released by the Central Government in July 2013 and State Government had released its share of Rs. 15.14 crore. He said that total 129.24 crores had been released to various departments and district administration for providing immediate relief to the affected areas. He told that the State as whole experienced heavy rainfall which was 576% to 1358% above the normal rainfall during the 15-17 June 2013 and Kinnaur and Sirmour district were the worst affected. He told that total 69 human lives had been lost and 2427 animals have perished in the flash floods. He told that 11157 houses, 4519 roads, 2763 water supply schemes had been badly damaged in the flash floods.

Chief Minister Virbhadra Singh requested the Prime Minister, Dr. Manmohan Singh to restore the industrial package of the State till the year 2020 to remove regional disparity in the field of industrial development and create employment avenues to youths in the State. He told that Special Package to the industries was introduced in the year 2003 for the period of 10 years till March 2013. However the incentive of central excise duty was withdrawn in March 2010 and income tax incentive was withdrawn in March 2012. He told that the these incentives to Special Category States were not adversely affecting the industrial development of bigger States and told that about 16500 units in small, medium and large scale sector with the proposed investment of Rs. 48,830 crore having employment potential of 5,42,580 persons was approved between 6th January 2003 to 31st March 2013. However out of these approved units only 9,353 units with investment of Rs. 14,557 crore having employment potential of 1, 20,602 persons were actually set up in the State. He said that State Government had made massive investment to improve infrastructural facilities in industrial areas to facilitate the industrial investment.

Dr. Manmohan Singh sympathized with the flood victims of the State and said that the State had badly suffered in recent flash floods and assured all possible central assistance. He appreciated the relief and rehabilitation works done by State Government in restoring the normalcy in the flood affected areas.

Dr. Manmohan Singh assured the delegation that all the demands of the State Government like extension of Industrial Package, Special Plan Assistance, strengthening of Rail Network will be positively considered by the Central Government in time bound manner to increase the pace of the development in the region and fulfill the aspirations of the people from present Congress Government.