Shimla: Two persons have died while two others sustained injuries after a pickup (HP 16 0228) they were travelling in plunged into a deep gorge in Rajgarh Subdivision, Sirmour district.

The accident took place on Sunday around 1:00 pm near Shilabag when a driver lost control of the vehicle and it plunged into a deep gorge.

The accident was noticed by local residents who immediately informed the police. A police team reached the spot and rushed them to Civil Hospital, Solan where two of them were declared brought dead. The rest of the two are undergoing treatment.

Superintendent of Police (SP) Sirmour confirmed the report and said further investigation is ongoing. He said that the bodies will be handed over to their families for cremation after conducting the postmortem.

The district administration provided a compensation amount of Rs 20,000 to the kin of the deceased. 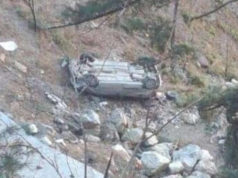