Maj Gen Atul Kaushik (retd), Chairman of HP-PERC and the Chancellor of Shoolini University Prof. PK Khosla moved the declaration to work for zero-waste and zero-carbon universities in Himachal Pradesh through sensitization, awareness generation and role-modelling by management and the faculty.

Maj Gen Atul Kaushik asked the participating universities to achieve a zero-waste target in Himachal by 2025 since there is a dire need to bring about change in the mindset of the younger generation by demonstrating lifestyle changes through personal example.

He also asked for the universities to introduce a curriculum on environmental studies and make it a mandatory interdisciplinary programme for every student.

Lalit Jain, Director, DEST, lamented the devastating impact of urbanization. He said that urbanization has impacted glacier cover, biodiversity and lost about 60 rare species. He offered DEST help to all the universities to partner and help contain waste in which department shall help them out.

Prof. Atul Khosla, Vice-Chancellor, Shoolini University welcomed the guests and encouraged them to pledge not to use plastic and to work towards creating sustainable campuses in the state by taking suitable measures to protect the environment. He also emphasised the importance of planting trees and the use of the solar system as possible.

It is also declared in the conference that the Universities shall endeavour to create future infrastructure in their respective campuses which is environment-friendly and do not have detrimental effects on biodiversity, natural resources, and the general ecosystem. 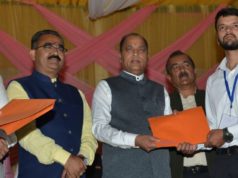