Now the bill will be presented in Parliament and after its nod, Hatti Community will also be able to derive benefits meant for STs under the existing schemes of the Government.

The Hattee community had been demanding the ST status for the last 50 years. The BJP has also been supporting the demand and it gained momentum in April with the Union Home Minister Amit Shah assuring CM Jairam Thakur about the same.

BJP national president JP Nadda had also supported the demand during his recent visit to Paonta Sahib and Nahan.

The Hattee community is demographically spread in the Sirmaur district with borders around Uttarakhand. Four of the five assembly segments of Sirmaur comprising Renuka Ji, Pacchad, Shillai and Paonta Sahib will reap its benefits in the ensuing assembly elections. 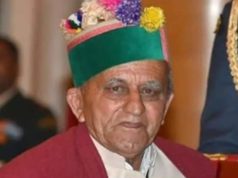