Shimla: In wake of the Rajya Sabha seat falling vacant on 2 April with the term of sitting MP Anand Sharma coming to an end, the Himachal Pradesh Assembly has announced the election to be held on 31st March.

In a notification issued here on Monday, Secretary Vidhan Sabha who is also the Returning Officer stated that an election is to be held of Member to the Council of States by the elected members of the Himachal Pradesh Legislative Assembly.

He said, “Nomination papers by the candidate or any of his proposers can be filed by 21 March 2022 to the Returning Officer.”

“The nomination papers will scrutinize on 22 March. The notice of withdrawal of candidature can be delivered either by the candidate or his proposer or his election agent on 24 March,” he added.

He further said that in the event of the election being contested, the poll will take place on 31 March between 9.00 am and 4.00 pm. 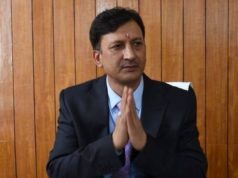