Shimla: The state Cabinet on Thursday decided to open schools for 10th, 11th and 12th classes with effect from 2 August 2021 by strictly following the SoPs.

In a meeting, the state cabinet allowed to open the residential and partially residential schools for 10th to 12th classes by following the SoPs.

It decided that the students of the 5th and 8th classes would be allowed to visit schools for doubt clearances with effect from 2 August 2021.

Cabinet also allowed coaching, tuition and training institutions to function with effect from 26 July this year by following SoPs.

The research scholars in universities would be allowed as per the dates to be notified by the Universities authorities. 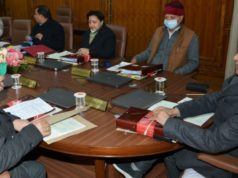