Shimla: Newly formed Rashtriya Lokneeti Party (RLP) is set to expand itself in the Himachal. Party is aggressively expanding in the state and will be constituting its organisation in August. The party will appoint State Advisory Board and State Core Working Committee.

RLP will kick off its political journey in the state by contesting in the upcoming by-elections of the Mandi Parliamentary Constituency (PC).

The party aims to select its candidate and prepare its manifesto by considering the suggestions of the people. For this, the party has uploaded a selection letter on its official website through which the people can nominate their favourite candidates.

RLP will only select those candidates who would have received the greatest number of nominations.

National Convener of the party Deepak Pandya has said that it is a matter of pride and honour to contest elections in the state for the first time. “main principles of the party are transparency, good governance as well as accountability for which the party aims to make a real time data along with new era leadership.” He further added 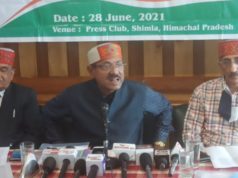 HLP to play vital role in Govt formation in the state:...