Shimla: CPM Theog legislature has alleged nepotism and violations of rules and regulations in the Vidhan Sabha recruitments and demanded Chief Minister to conduct judicial inquiry into it.

Rakesh Singha, while addressing Media, accused former Vidhan Sabha Speaker Rajiv Bindal for violating rules and regulation in appointment of his near and dear.

Singha claimed that the selections, including that of a law officer, an assistant librarian, a junior translator and a couple of chowkidaars, appeared unfair and demanded a judicial inquiry to bring out the facts.

Raising question over an appointment of Law Officer at State Vidhan Sabha, Singha claimed that as per the Recruitment and Promotion Rules, there is no provision for the post of law officer in the Vidhan Sabha Secretariat. Even though Bindal’s private secretary’s daughter has been appointed on the post, raises question.

He also raised doubts over the selection of an assistant librarian. He claimed that identity of appointee had been concealed. Supported his allegations with facts, Singha claimed that in an official record – appointed candidate had been referred to ‘as the daughter of’, not ‘as the wife of’ even though she is married. Singha further alleged

“identity has been concealed as her husband was a co-accused along with Bindal in the criminal case registered by the Vigilance regarding the appointments in the Municipal Committee, Solan, in 1997-98.”

Meanwhile, BJP leader Rajiv Bindal has rejected the allegations and termed them false and politically motivated. Bindal, in a press statement, claimed that all appointments were made following the rules. 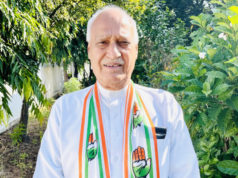 Nodal Officers appointed to keep an Eye on Election Expenditure