Mandi: Indian Institute of Technology Mandi research team in collaboration with researchers from Yogi Vemana University have designed a novel photocatalyst that can remove pollutants from water while simultaneously generating hydrogen using Sunlight.

Photocatalysis – the driving of chemical reactions through the joint action of light and a catalyst – has been of much scientific intrigue since its first report in 1911 because of the promise of using light to get many useful products. “After all, if plants and trees can use sunlight to carry out life-sustaining chemical reactions, why can’t we do it in the lab?”  asks Dr. Venkata Krishnan.

In this research, researchers have designed a series of novel and multifunctional nanocomposite photocatalysts by coupling mesocrystals of calcium titanate with edge sulfur atoms enriched molybdenum disulfide and reduced graphene oxide. A specific and useful example of a photocatalytic reaction is the splitting of water into hydrogen and oxygen. Although this reaction was demonstrated as early as 1972 by Fujishima and Honda, the inefficiency of the process has been a bottleneck in scaling up the technology for practical applications. In addition, the researchers have also used these photocatalysts in the degradation of organic pollutants found in water.

“The performance of a photocatalytic reaction depends upon the efficiency with which the photocatalyst converts light energy into photogenerated charges that drives the reaction of interest,” explains Dr. Venkata Krishnan. Photocatalysts work by generating electron-hole pairs when exposed to light of specific wavelengths, which induces the reaction they are meant to catalyze. Oxide materials such as titania and titanates are commonly studied photocatalysts, but these materials are often inefficient by themselves because the electrons and holes combine before the reaction can be propelled forward. Dr. Venkata Krishnan said

“Mesocrystals, a new class of ‘superstructures’ made of highly ordered nanoparticles, could limit the recombination of electron–hole pairs because the free electrons that are generated flow between particles before they can recombine with the hole,”

It may be known that graphene is the new “wonder-material” in the field of materials science, ever since its isolation earned the Nobel Prize in 2010. The scientists at IIT Mandi found that remarkable enhancement in photocatalytic activity could be achieved with this combination.

Dr. Venkata Krishnan attributes the enhancement in photocatalytic performance of their material combination, to three factors – the intimate contact between the three components, which leads to better electron transfer, the high surface area that provides more space for the reaction to take place and specific sites on molybdenum disulfide (MoS2) that act as sticky sites for the positive hydrogen ions that are generated during the reaction, which in turn enhances hydrogen production.

The IIT Mandi team is excited about future directions to this work and believes that their strategy can be adopted to improve the properties and performance of other mesocrystals, which can lead to the fabrication of low-cost and multifunctional catalysts for diverse applications. 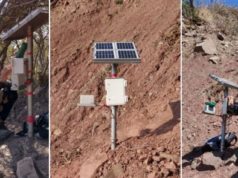