Under NABARD projects’ new road constructions of 143.13 kilometres, up-gradation and metalling tarring of 60.68 kilometres and construction of five bridges would be done.

The Chief Minister Jai Ram Thakur expressed his gratitude towards NADBARD for sanctioning current batch of roads and bridges under RIDF-XXV. He also said that NABARD (RIDF) is playing a significant role in road connectivity in rural areas and it has special importance for a hilly state like Himachal Pradesh where roads are the only mode of connectivity.

Principal Secretary PWD J.C. Sharma assured the Chief Minister that the department would put its best efforts to implement these projects. He further informed that 115 projects including 102 roads and 13 bridges amounting to Rs. 464.83 crores have been sanctioned under RIDF-XXIV during the financial year 2019-20. 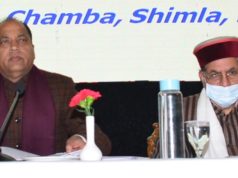 Himachal Govt to connect all Gram Panchayats with broadband