(DIG Sudhakar Natarajan) As an Armed Forces veterinarian, the highest decoration received by me was during the very first year of service, from a grey ghost.

I was detailed as a party commander in a Swaraj Mazada with 14 men to reach Transport Batallion (Tpt Bn), Chandigarh from my unit in Ladakh. This was in the summer of 10th July 1993, and I was to report to Tpt Bn for my 10 weeks Riding Course. My Unit CO, Comdt Hanuman Singh Yadav, had also given me Rs35,000/- (a big money those days) to hand over to the Incharge of Transit Camp (TC) for improvement in facilities of troops at the TC. The other men with me were proceeding on leave and transfer.

After two days on of travel, just as we were ascending the treacherous Baralacha Pass at a height of 16,000 feet above sea level, the engine wheezed and coughed. The poor Swaraj Mazada was working in conditions in which the automobile engineers, who designed the vehicle, would never have imagined she would serve. Rarified atmosphere. The engine tried her best to suck oxygen, but she grunted, chocked and died at exactly 16,100 feet with a blizzard blowing and the bone numbing cold, with wind chill factor many degrees below zero, that was felt by our very core. One didn’t require any meteorological equipments, we could feel it in our bones. The time was 1400 hrs, but looked as if the sun of hope had set on us.

When ‘dhakka start’ and ‘sucking air filter’ failed, we faced a unique situation. This was in the middle of nowhere. The nearest human inhabitation on either side of the pass, on foot, would have taken us 2 days. If I had ordered troops to walk in the blizzard, I was sending then into the deadly embrace of frost bite. I had no radio and there were no mobiles in those days.

I took stock of the situation. We were carrying adequate rice, dal, a stove with enough kerosene oil, sugar, tea, milk-maid tins. The Swaraj Mazada, bless the designers, had large glass windows and thick insulation on all sides. Even the dying sun’s rays had succeeded in slightly warming the vehicle.

I took an executive decision at 1800 hrs, much against opinion the troops to stay in the vehicle for the night, instead of risking it outside. Two more factors helped me to decide to stay in the vehicle, one was that this an avalanche free area and the second was that all of us had just returned from border out-posts having faced the mighty Marsimik La at nearly 19000 feet. So this location was 3000 feet less than what we are accustomed to. I was sure that the Border Roads Organisation, Project Himank, would clear the road in the morning.

We tucked ourselves into our sleeping bags and slept peacefully after a hot tea followed by a delicious dal-chawal with desi ghee, cooked on the stove inside the vehicle. For water, we just scooped up snow and melted it.

Next day morning, when I opened my eyes, fully refreshed, I was thrilled to see brilliant blue skies and the sun at his full glory. The warm rays of the sun, heated up the cabin so much that many of us removed our balaclavas. Then I looked down. There was 3 feet snow embracing the vehicle in her loving hug from all sides. The Mazada was stuck for good until the road opening party came.

Havildar (Vet) Satinder Singh wanted to make tea. We jumped out of the vehicle into hip deep snow to scoop it to make our tea.

As we got out our vehicle, we heard loud squealing sounds from the direction of an outcrop. When I turned my head towards the sound, I saw a furry cat looking at me and making loud painful noises. Satinder Singh and I, went towards the animal, and we were taken aback to see that it was not a normal cat, but a Snow Leopard cub, a few weeks old.

I stood stunned. A snow leopard cub seen meant that the mother was close by. But the question in our minds was as to why a young cub was looking at us and crying?

I told Satinder that we must see what this beautiful little cub wanted and why it was away from the mother. Was the mother dead? Had the cub lost its way?

We managed to wade through snow and reach the cub. The cub turned and ran. We followed the cub, and were stunned to see a full grown adult Snow Leopard. We stopped.

I could hear my heart thudding in my throat, and my mouth went dry. We stood transfixed. As our logical reasoning returned, I realized that the snow leopard was lying down and was not moving. Except for tip of her tail, which was beating against the snow, there was no movement. The leopard was alive. Why didn’t she run away or attack us, in the ‘flight or fight’ animal instinct that I had read about.

On closer inspection, after my breathing and excitement normalised, I saw that her nipples were engorged and this magnificent beauty was lactating. The cub now went to his mother and started suckling.

The mother leopard was definitely sick. She seemed paralysed. But I still could not get over her beauty. I am probably the only person in the whole world to see this shy big cat that is even difficult to photograph with a telephoto lense, within just 2 feed distance. Her grey fur had black spots on the head and neck and there were larger rosette like black patches on her tail and flanks. On visual estimation she appeared around 50 kgs weight.

As I gained courage, I went closer. Her eyes were open. By God, what beautiful eyes!! I could see her deep liquidy eyes that were pale green with specks of gold. Again, I am the only blessed person on this earth to gaze deep into the eyes of a wild Snow Leopard. I fell in love with her.

But veterinary training kicked in. ‘Love-shove’ is ok, but what was wrong with her? If we leave her, she would die. I was sure of this. I tried to remember our 3rd year Veterinary Medicine bible written by Dr D C Blood and Dr J C Handerson.

Female patient. Lactating. Cannot get up, Milk engorged teats, paralysed and in a recumbent position.

Common Sudhakar, think, I told myself. I stood on the spot enthralled with the beautiful lady before me.

Bingo!! It hit me suddenly!! Yes, man, this is bloody Hypocalcemia. Milk Fever. This paralysed beautiful Leopard was in this condition since most of her circulating blood calcium had been diverted to her milk, and all that she required was to pump calcium into her veins.

When I told Satinder, he told me with a smile that he had brought a MVFA (Mobile Veterinary First Aid) Kit. I asked him with trepidation, ‘Do you have Intravenous bottle of Calciumborogluconate and an IV set”. He replied, “Bilkul sir”.

This was half the battle won. I had the diagnosis. I had the medicine. I had the IV set. Now the moot question, which Veterinarian in his right mind will go to a wild big cat and stick a needle in her vein and set up Intravenous infusion?

Anyway I was not in my right mind. I was madly in love with her. I had to do it. I told Satinder to get the Calcium borogluconate bottle with the IV set.

Now I had the option of approaching the Cephalic vein on the forelegs. But was I so mad to poke a needle into her fore leg just near her wide jaws? Even though she was unable to move, one never knew, she could easily have snapped off my right hand with her bite.

Better sense prevailed. My head won the battle with my heart and I decided to go for the Sephenous vein on her rear legs, relatively away from her jaws.

As both of us approached this royal cat, she snarled. I could see her pearly white canines and her sharp incisors. If she suddenly found the strength to attack us, that would have been our end. But as they say, a veterinarian has to be slightly mad to be in this profession, when a safe desk-job could get us greater safety and money.

I had the honour of touching her majesty on her legs. As I slid my thumb over her vein on her legs, my palms rested on her soft thighs, and I could feel the pulsating warmth. As I introduced the IV needle into the Sephanous vein, I saw blood flowing out, indicating a successful puncture on the very first attempt. Quickly Satinder set up the IV drip and we saw with satisfaction the life giving calcium flowing into the queen’s blood.

After around 5 minutes, we saw that she could lift her head slightly. We kept the slow intravenous drip on for around 15 minutes, silently admiring the beauty of this rare royalty. I knew that as per the census at that time there were only around 4000 adult snow leopards in the world. We had the rare honour of treating an endangered large cat, in absolute pristine wild conditions.

Slowly we removed the drip. I also gave her an intramuscular injection of Dexamethasone, to combat any hypovolmic shock.

Just like courtiers, withdraw from the Queen’s Court, both of us slowly retraced our steps behind a large rock, all the time keeping our eyes on her.

As per Veterinary Books, the recovery from Milk Fever Paralysis, takes around 15-30 minutes, in optimistic cases. Was my diagnosis correct? I still had doubts.

After some time we saw a miracle. The majestic Snow Leopard, lifted her head first. Swished her tail from side to side, and with a sudden jerk, she was on her feet. Fully alert. She knew we were behind the rock. I peeped over. She looked directly into my eyes. Even at the distance of around 20 feet, I could see her eyes, shining with gold dust and green hue.

She picked up her cub in her mouth gently, and climbed over a rock. For the last time she looked back at us, as if to say goodbye, and slowly walked away with her precious cub in her mouth.

I knew we will never meet again, but the final glance she gave me was the highest decoration I have received in my entire career in ITBP.

After celebrating my birthday on 15th July in Keylong, we finally reached Tpt Bn Chandigarh on the 6th day and I handed over the money to the IC TC and reported for my Riding Course, still thinking about her royal highness, the grey ghost.

(The author is a DIG and Veterinarian in ITBP having served the horses, dogs and yaks of this crack mountain Force for more than two and a half decades) 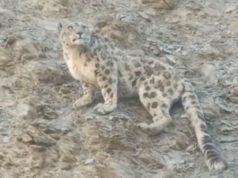 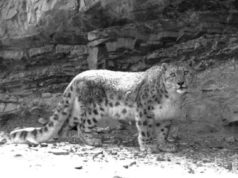