Dharamshala/Una: Two persons have been killed while 31 sustained injuries in two accidents in Himachal Pradesh.

In one incident, two devotees from Punjab were killed while 17 others sustained injuries after a pick-up in which they were travelling skidded into a deep gorge in Kangra district. They were on their way to visit Bajreshwari Devi temple in Kangra.

The deceased have been identified as Gurpratap Singh (18) and Harpreet Kaur (33), both residents of Amritsar, Punjab.

The accident took place near Kotla when a driver lost control of the vehicle and it plunged into a deep gorge, killing Gurpratap on the spot.

In another incident, at least 14 devotees from Phillaur, Punjab sustained injuries after a tempo truck they were travelling in turned over in Una district.

According to reports, around 40 devotees from Punjab had come to visit Baba Balak Nath Temple and were going back to Punjab. When the tempo reached Hari Nagar in Una district, a driver lost control of the vehicle and it turned over on the road, due to which 14 devotees sustained injuries.

Police reached the spot as soon as it received the information and rescued the injured. The injured were rushed to a nearby hospital, out of which four were referred to Civil Hospital, Una for further treatment.

Superintendent of Police (SP) Una Arjit Sen confirmed the report and said the police is conducting the investigation. 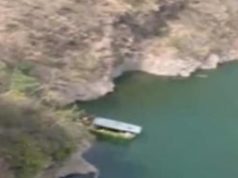