Rana claimed that “present state government is taking credit for inauguration and laying foundation stones of developmental projects worth Rs 22 crores in Sujanpur Legislative Assembly Constituency but in reality present government has nothing to do with these projects.”

In a statement issued by Rana, he has said state government has not done anything at the ground level during its three-year tenure.

Rana said that most of the work of the Mini Secretariat of Sujanpur was completed in the previous government itself. Construction of 12 roads under NABARD is already underway. Dhaulasiddh power project has also received in-principle approval during the Congress term, Congress MLA claimed.

“Jai Ram Thakur led government is only inaugurating and laying foundation stones projects which were either completed or were sanctioned during Virbhadra Singh led government” he added.

He further said that the Tauni Devi Tehsil office worth Rs 2.15 crores, which was inaugurated by Jai Ram Thakur, was completed during Virbhadra Singh’s tenure. He said that the automation of pumping machinery of Duhak, Dhel, Patalandar and Bhaleth Lift drinking water scheme in Sujanpur and channelization of left riverbank of Beas were already approved under MLA priority by Rajindra Rana.

“Not even a single developmental project has been initiated by this government. Sujanpur’s situation is also like the rest of the areas of the state” he added. 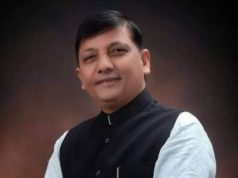