Jai Ram Thakur said that a Command Control Centre would be established soon for making the Chief Minister Sewa Sankalp Helpline more effective and user-friendly. He said that Chief Minister’s Dash Board would also be established at the earliest and a team of officers would visit Gujarat for studying the model so that it could be made more effective.

He said that with the operationalization of Chief Minister’s Dashboard, he would be himself able to have first-hand information of various complaints and grievances besides progress in their redressal.

Chief Minister directed the officers to ensure to redress the grievances within the stipulated time so that relief could be provided to the complainants.

Jai Ram Thakur directed to close complaints and grievances only after ensuring complete satisfaction of the complainants. He cautioned to take strict action against force closure of complaints.

The CM asked for effective coordination between different departments so that the complaints do not shuttle from one to another department. He also felt the need for simplification of procedure for making it more users friendly.

Chief Minister assured to monitor the progress of the Chief Minister’s Helpline besides making random calls with the complainants to inquire about their level of satisfaction. 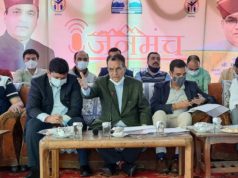 Over 1500 patients provided home delivery of Medicines in Sirmaur district