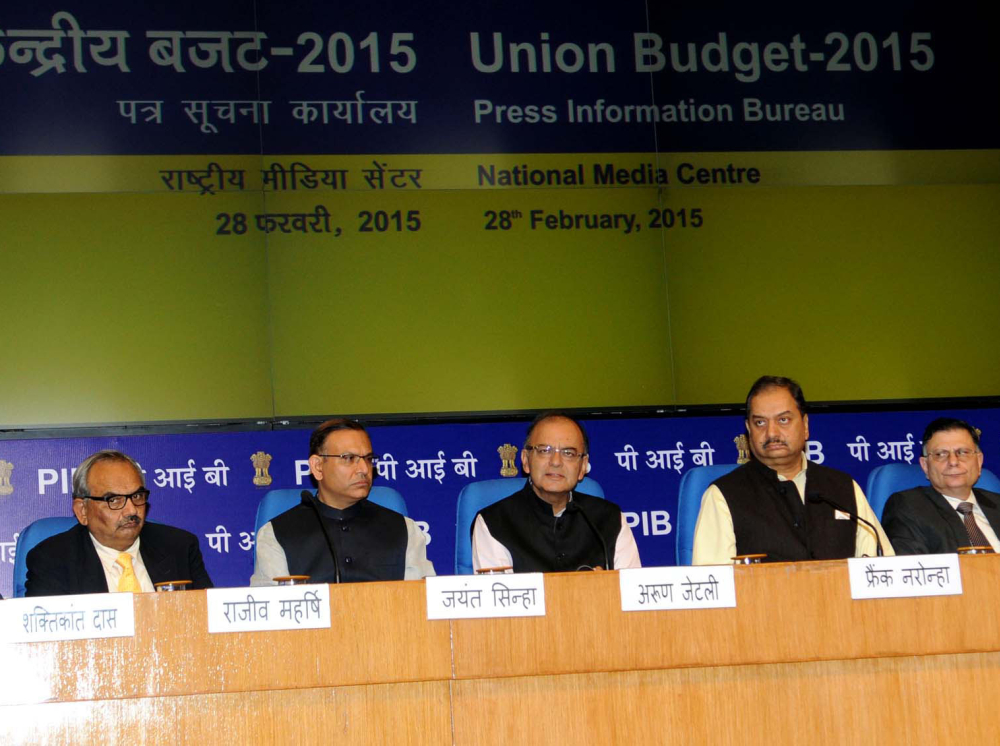 Finance Minister Arun Jaitley presented Union Budget 2015 in Parliament today. It’s first full Union Budget for Jaitley. He is hoping estimated 7.4% GDP growth for 2014-15 and growth between 8 to 8.5% in the next financial year.

The Minister underlined that India has to think in terms of a quantum jump.

Rs. 68,968 crore has been allocated to the education sector including mid-day meals, Rs. 33,152 crore to the health sector and Rs. 79,526 crore for rural development activities including MGNREGA, Rs. 22,407 crore for housing and urban development, Rs. 10,351 crore for women and child development, Rs. 4,173 crore for Water Resources and Namami Gange.

Non-Plan expenditure is estimated for the Financial Year are Rs. 13,12,220 crore.

Atal Pension Yojana for Defined Pension, Government to Contribute 50% Of The Premium

5 New Ultra Mega Power Projects to Be Set Up

New Institutions Including AIIMS, IIT and IIM to Be Set Up

Objective of Stable Taxation Policy and a Non-Adversarial Tax Administration

Fight against Scourge of Black Money to Be Taken Forward

Efforts on Various Fronts to Implement GST from Next Year

Proposal To Reduce Corporate Tax From 30% To 25% Over The Next Four Years, Starting From Next Financial Year

Exemption to Individual Tax Payers to Continue To Facilitate Savings

The Finance Minister also informed that the work assigned to the Task Forces on the Financial Data Management Centre, the Financial Sector Appellate Tribunal, the Resolution Corporation, and the Public Debt Management Agency are progressing satisfactorily.

8 Centrally Sponsored Schemes Delinked from Support of the Centre

Whereas 24 Schemes to be run with the Changed Sharing Pattern while 31 Schemes will Get Full Support of the Centre.

The Union Finance Minister Arun Jaitley has proposed to merge the Forwards Markets Commission with SEBI to strengthen regulation of commodity forward markets and reduce wild speculation. Enabling legislation, amending the Government Securities Act and the RBI Act is proposed in the Finance Bill, 2015.

It has also been proposed to amend through the Finance Bill, Section 6 of FEMA to provide that control on capital flows as equity will be exercised by the Government, in consultation with the RBI.

The Finance Minister proposed to create a Micro Units Development Refinance Agency (MUDRA) Bank, with a corpus of Rs. 20,000 crore, and credit guarantee corpus of 3,000 crore, which will refinance Micro-Finance Institutions through a Pradhan Mantri Mudra Yojana,. He added that priority will be given to SC/ST enterprises in lending.