Shimla: Additional Deputy Commissioner Shimla Yunus, Dy. General Manager, Punjab National Bank V.K. Goel, along with 50 others have pledged to donate their eyes, in a camp organised by the Umang Foundation.

The Umang Foundation has organised the function to mark Makar Sankranti festival, where defying snowfall and biting cold wave, as many as 52 persons came forward to fill up the pledge forms for eye donation.

Yunus, ADC, Shimla while appreciating the efforts by Umang Foundation said, “Eye donation is the biggest service to the humanity as it gives sight to two visually impaired persons”. He also stressed to create more awareness so that more blind people could be benefited by eye transplant.

V.K. Goel said that his bank always supports the cause of blood donation and eye donation.

Ajai Srivastava of Umang Foundation said that a blood donation camp was also planned on the occasion which could not start due to snowfall and severe cold wave. A large number of blood donors who turned up in the camp were deeply disappointed. 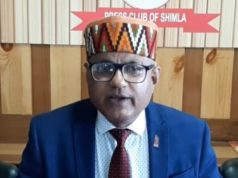 Govt to revert to old pattern for MC election